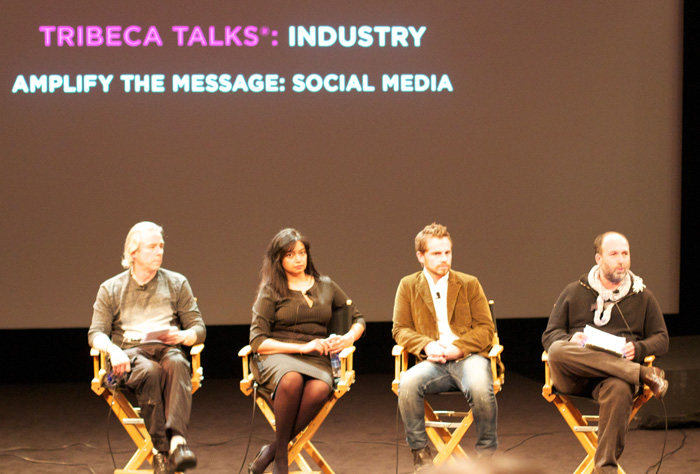 The panel was really inspiring, mainly because it pointed out some aspects that aren’t usually touched at similar events, and additionally the inputs of such diverse personalities and experiences gave an interesting dimension to the discussion.

These three issues caught our attention:

Social media was the theme of the panel, but in fact it functioned as a starting point to discuss many topics related to filmmaking, such as digital distribution, creating revenues, audience viewing experiences, marketing strategies and keeping up whith your social networking skills as a fillmaker. This illustrated the impact social media has on all various levels. The social media tools can influence all stages of filmmaking, which means filmmakers can not ignore the presence of it anymore. Many films were used as examples to show this development, although one conclusive thought is that it will always vary per individual film how social media can be used most effectively in that specific case. Sometimes the use of social networks might even not be that useful for certain types of films (e.g., arthouse), but either way the presence of it can’t be ignored anymore. Social media is out there, and the film community has to embrace it somehow, in some way…

If you want to read interesting thoughts about this theme, the contributors of the panel can definetly give you valuable insights. Here are the links to their projects:

You can also watch the entire video of the talk!