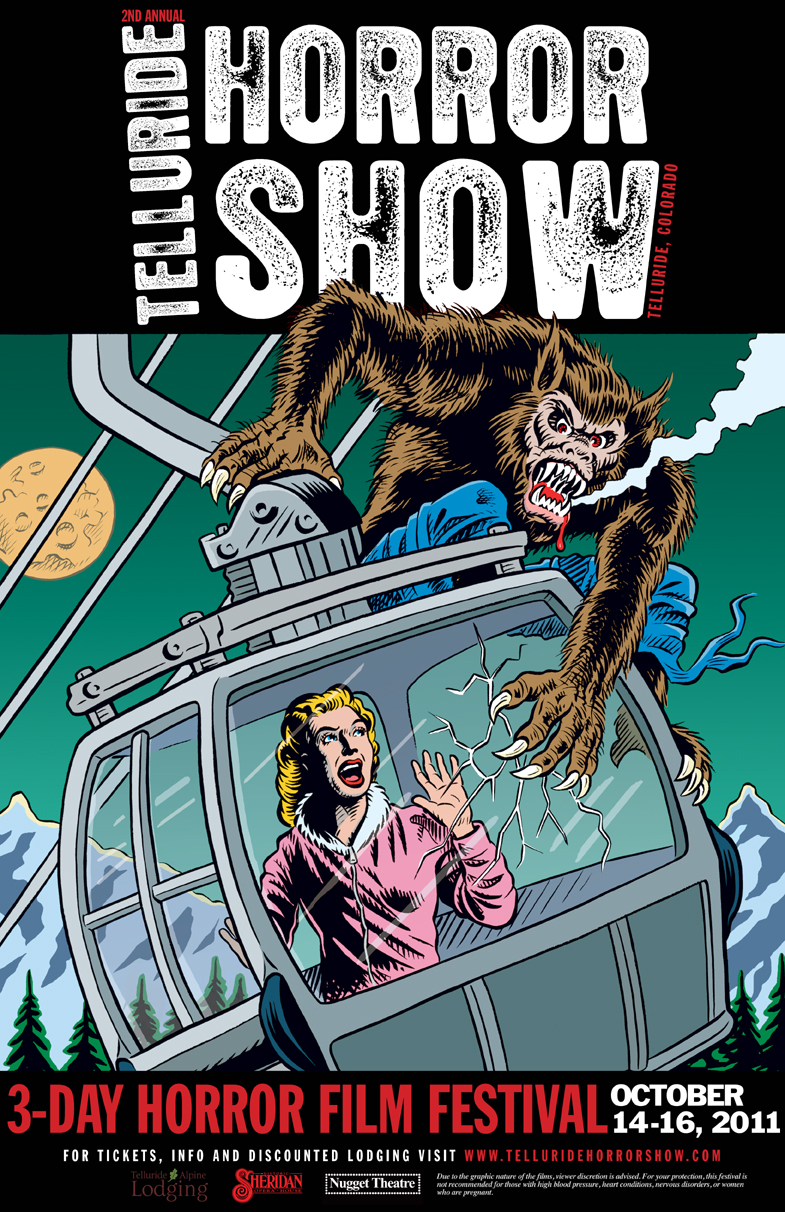 To launch an event like a film festival is a huge venture. There is more to it than just the idea. In the age of Facebook giving your brand exposure to the public is at least easier, but also brings a lot more work than one would expect in the first place. The young film festival Telluride Horror Show has been using the social network very effectively since its start last year. The result: around 24.000 fans on Facebook. This made us very curious to know how they got to this level so quickly!

Festival director Ted Wilson shares his insight information on how a beginner film festival can establish itself and what other film festivals could do to force their marketing, in- and outside the world wide web.

FilmFestivalLife: Last year was your first edition. What is your feedback from your first running?

Ted Wilson: Despite the long hours and the stress, I had a great time putting on the 1st Annual Telluride Horror Show. From a production stand point, everything went off without a hitch. We just needed more people to show up! I’m sure that sounds familiar to a lot of promoters out there. Looking back, I suppose I didn’t do enough traditional marketing. But the people who came had a great time, loved the films, and they’re all coming back. I’m much more excited as we move into our second year. Because we now have “word of mouth.” My advice to anyone who wants to start a film festival: Be patient. It’ll take years to become established. And I mean, YEARS. We have a handful of successful and renowned festivals here in Telluride that proves that very point. They all started tiny, and took years and years to build up to what they are today. Of course, you can skip those years if you’re rich and have a bunch of money you want to blow on a festival!

FFL: To brand your Film Festival you use Facebook and Twitter or the so-called “Social network”. How important is social media for a young film festival?

TW: We’ve taken full advantage of Facebook to reach out and find fans of horror and genre films. It does take time to keep a Facebook page interesting and engaging, but it doesn’t cost a dime. Because it’s free, it really is an amazing marketing tool. We do have a Twitter account but we just post tweets on major festival announcements (line-up announcements, tickets on sale, etc.), simply because I don’t have the time to maintain both on a regular basis! If you’re starting a film festival, plan to hire a social media manager as you grow. It is a full-time job to maintain all the different outlets: Facebook, Twitter, your YouTube channel, your blog, etc., etc.

FFL: How important is social media to develop a new brand?

TW: Facebook could quite possibly replace the “internet” as we know it. When you see a commercial on most of the brands list their Facebook page, not their website…that says it all. The big companies have already made the switch over to social media as their main content on the internet.

FFL: How did you achieve to have so many fans on Facebook in just the first year?

TW: We currently have 24,000 fans. How did this happen? I ran ads on Facebook targeted to horror fans, because I found a way to get “Likes” for incredibly cheap. If you place an ad on Facebook and you’re paying, say, 50 cents per click, you’re paying WAY TOO MUCH, and it’s probably not worth the expense. How many of those 24,000 fans are actually going to come to our festival? A very small percentage. However, it has resulted in paid film submissions as filmmakers the world over have seen our ad and submitted their films to our festival. So there’s collateral advantages. And it doesn’t hurt to have a lot of people AWARE of your festival. But, again, only run ads on Facebook if you can get “Likes” for pennies. It’s too soon to tell what the results will be as far as those fans becoming paying attendees at the Telluride Horror Show. Get back to me after October 16th!

FFL: In the field of marketing are there particular activities not taking place anymore because of the social media instruments?

TW: Being able to interact with your fans with tools like Facebook is helpful. You can essentially “talk” to them daily, and directly. There hasn’t been marketing that effective since the old days when we used to talk on the phone to people! There’s all the talk about the death of print and radio. BUT, if you’re starting a special event, and you ignore print and radio marketing, you’re going to be in trouble. Marketing through social media isn’t nearly enough. So, really, social media is a mixed blessing. At the end of the day, it’s created a lot more work for festivals. You have to write press releases and get them out there, you have to try to get on the radio stations to push your festival through interviews, you have to run ads in local/regional newspapers, run ads on the radio, do giveaways and special promotions, design, print, and distribute posters and flyers, do email blasts, maintain a website, then you have to come home and update your Facebook page, send a tweet, post a blog. And people still won’t show up, unless a friend tells them to go. That’s the bitch of it. There’s still nothing better than word of mouth. At the end of the day, just put on a great festival! That’s the best marketing you can do.

FFL: Do you recognize any new marketing procedures used by festivals lately as opposed to a few years ago?

TW: Everyone I know in the festival business has just now started to take advantage of paid advertising on Facebook, so we’re at the beginning of a new frontier. Who knows what results this kind of marketing will truly yield? While all the major brands are pushing their Facebook pages, they’re not yet running ads on Facebook…

FFL: Will Telluride Horror Show have its own online film festival?

TW: I hope not. I hate watching movies on my computer or mobile device. That’s the beauty of having a genre film festival. We get to watch these movies on the big screen, in a movie theater, with other people, the way God intended.

FFL: Do you think festivals will develop towards online festivals vs. the traditional sense?

FFL: Due to the digital world is there a chance for film festivals to persist?

TW: I think film festivals will always persist. The thrill of watching the stars and the director of the film walk out on stage after its world premiere. Having a drink at a party and arguing with a famous film critic about the movie you both just saw. Sharing the experience with hundreds of other audience members in a dark theater. Last year, we screened “Tucker & Dale vs. Evil” at the Telluride Horror Show. It was the last show of our 3-day festival. I found a quiet spot high up in the balcony of the theater and sat there during the movie, listening with a smile to the audience below, screaming at the bloody parts, laughing at the funny parts, and doing it all together. Human interaction. We need it, and the internet or your fancy Blu-ray player doesn’t offer it. You can sit at home and watch “Fright Night” on DVD, but the director isn’t going to walk into your living room afterwards and talk to you about the film. Also, popcorn tastes so much better at the movie theater.

Thanks Ted, for sharing your experience and know-how about the festival circuit with us!