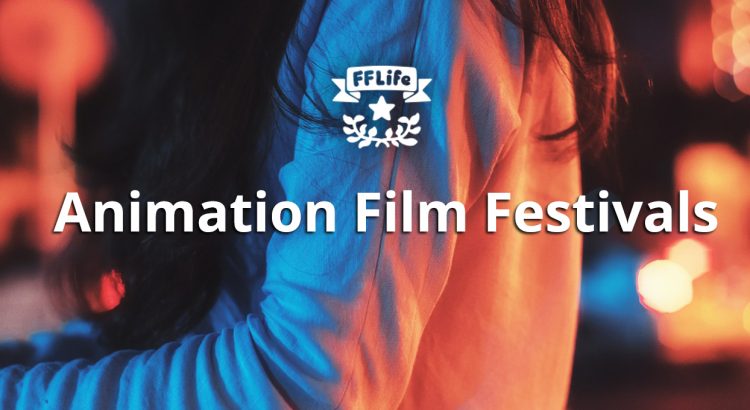 The genre animation films is a limitless field for experimental art of every color, exciting and often unconventional, bold and passionate, more inspiring than live action films. Film festivals also know this and that’s probably why there are so many festivals, in all kind of variations, dedicated to animated film.

There are so many animation film festivals that we felt the need to create some order around them. Here comes another FilmFestivalLife list! We didn’t include established players such as Sundance, Venice or Berlinale that of course dedicate a section to this popular genre, because these festivals are an obvious target for most filmmakers. We’ve created a manageable overview of those festivals of which the main focus is animation, those festivals you definitely shouldn’t miss as an animator. As usual we have divided the festivals in the categories must haves, important ones and to keep on the radar. Not to forget, the comprehensive link list to complete the informal section!

Annecy International Animated Film Festival and Market (Annecy, France) (1960) Annecy is one of the most important and oldest festival of its kind. The festival was a part of Cannes International Film Festival, but since 1960 it stands alone and takes place every second year. During the Festival, the International Animation Film Market, called MIFA, gives filmmakers the opportunity to contact with the animation businesses. The festival brings the creators and decision makers for animated films together in one place, which makes the festival a trendsetter for animation-related events. The winner of the short film competition is automatically qualified for the OSCAR for best short film.

Holland Animation Film Festival (Utrecht, Netherlands) (1985) Since 2009, HAFF is a five days yearly event that takes place at several locations. It is one of the oldest festival of its kind and highlights the latest developments and emerging talents, shows retrospectives and theme programs, and organizes a lot of additonal activities next to the main festival program. The main programme sections are The Cutting Edge and the competitions including international ones for feature films, animated shorts, animation for internet and applied animation. For European student films HAFF additionally has a European competition. The Cutting Edge presents the interplay between film, games, fine art and internet.

International Leipzig Festival for Documentary and Animated Film – DOK Leipzig (Leipzig, Germany) (1955) DOK Leipzig is one of the leading international festivals for artistic documentary and animated films. Its the second largest of its kind in Europe. During the Cold War the festival was a cultural meeting place for filmmakers from East and West to exchange ideas and knowledge. Both the mix of international documentaries and animated films, and short and feature length films make this festival special. DOK Leipzig is established as an industry meeting place with platforms for professionals to pitch ideas (DOK Ideas), sell films (DOK Market), find co-production partners and discuss current trends and developments (DOK Summits).

Ottawa International Animation Festival (Ottawa, Canada) (1976) With an audience over 27.000, the yearly held OIAF is the largest event of its kind in North America. Since 1976 the festival provides screenings, workshops and exhibitions and brings art and industry together for five days. Animators can submit their projects in six major categories including Feature films, Short films, New Media, Commissioned films, Student films and Work Made for Children.

Anima mundi (Rio de Janeiro & Sao Paulo, Brazil) (1993) Anima Mundi is the International Animation Festival of Brazil. It takes place every year in July in the cities Rio de Janeiro and Sao Paulo.  The main mission is to present a diversity of animation styles, techniques and subject matter. The entry is for free. Anima Mundi supports works created by children with the festival session „Future animator“, which shows films made by children. The festival also has a contest called “Anima Mundi Web & Cel” – an international internet and mobile phone animation contest.

Animafest Zagreb (Zagreb, Croatia) (1972) The World Festival of Animated Film in Zagreb is the second oldest festival of its kind in Europe. It is built on the tradition of the Zagreb School of Animation. In 2005, Animafest Zagreb introduced a program of animated feature films and turned into an annual event. Since then the festival presents feature films every odd-numbered year, and short films every even-numbered year.

Encounters Bristol International Film Festival (Bristol, United Kingdom) (1995) This festival is the umbrella for Animated Encounters and Brief Encounters, which together present one of the world’s best-known showcases and meeting points for new and established animation talents and international short films. Animated Encounters wants to be an event to showcase and celebrate animated films and the talents, creativity, technology and skills that are put into these productions. This festival is the UK representative for the prestigious European Cartoon D’Or. In 2006 Brief Encounters and Animated Encounters were joined together as one event. Encounters now has a program full of events, including premieres, masterclasses, workshops, talks, guest screenings, and competitions.

Festival of Animated Film Stuttgart (Stuttgart, Germany)(1982) Since its start in 1982 the festival has developed into a significant event for animation film in Germany and worldwide. The festival provides a meeting point for animation professionals and newcomers. Successful initiatives, like the Animation Production Day and the Animation Coproduction Forum Eastern Europe, established the festival as one of the most important events of its kind. The various competition programs have a sum of prize money of more than 60,000 euros. A welcome side effect is that the winner of the short film competition gets automatically qualified for the Oscars.

London International Animation Film Festival (London, UK) (2003) Every year in August and September the London International Animation Festival shows a 10-day festival including the whole spectrum of creative animation, including gala premiers, retrospectives, workshops, Q&A’s with filmmakers and audience voting. LIAF wants to show that animation isn’t only for kids. The festival organizes special sessions for animators from countries who normally don’t get that attention.

Spike & Mike`s (Sick & Twisted) Festival of Animation (US-International-Touring, USA) (1977) “Spike & Mike`s Festival of Animation” is one of the longest running animation festivals. The event shows a collection of short animated films. It is annually held in La Jolla and then tours to theaters, film festivals, and college campuses in 50 North American cities. The festival is divided into two themes: Sick & Twisted and New Generation.  Spike and Mike’s festival has played a major role in helping the animation medium become one of today’s most popular facets of entertainment.

TO KEEP ON THE RADAR

animated dreams (Tallinn, Estonia) (1999) Animated Dreamsisthe oldest and biggest animation film festival in Estonia, Tallinn. It takes place in November and offers Estonian animators a chance to show their state of the art productions and to promote high-quality international animation culture. Selected films are also shown in other towns in Estonia, for instance in the framework of the Black Nights Film Festival. Last year the organizers  launched a new networking platform and training event, held during the festival, for up-and-coming young filmmakers called AnimaCampus Tallinn.

KROK International Animated Films Festival (different Cities, Russia and Ukraine) (1989) KROK is an annual international animation film festival. It is held in Ukraine in odd years and in Russia in even years. Since 1991, the festival is an international event and takes place on a cruise ship. Not only does KROK have competitive categories and does it shows over 300 animated films, but the festival also features other animation screenings, lectures and events.

MONSTRA | Lisbon Animated Film Festival (Lisbon, Portugal) (2001) With the 11th edition in 2012, MONSTRA | Lisbon Animated Film Festival is the oldest film festival in the city Lisbon. The festival presents the best in the world of animation cinema and strives to be a platform for dialogue between animation arts and performances art.  The festival has exhibitions, workshops, master classes, interdisciplinary projects and other projects that are combined with other  fields. The film submission is free and open to: Animated Short Films, TV Series, Student Short Films and Super Short Films.

Red Stick International Animation Festival (Baton Rouge, Louisiana, USA) (2005) Red Stick is a community event that brings together the worlds of technology, art, exploration and entertainment. A research group from the Louisiana State University’s Center for Computation and Technology hosts the festival. Since 2005, the founders have brought the idea of a way to demonstrate the connection between creativity and technology, from the Animex Festival in England to the United States. Currently, Red Stick is one of the largest events in the United States – and tries to offer animators, students, and all other in the circuit – a forum where they can share their knowledge and skills and promote the art of animation.

SIGGRAPH Computer Animation Festival (various) (1972) The annual meeting of the Special Interest Group on Interactive Graphics and Techniques — commonly known as SIGGRAPH — is not strictly an animation conference, it also hosts a film festival. In 2011, SIGGRAPH’s Computer Animation Festival celebrates its 38th year as an innovative exploration of computer-generated animation and visual effects. The festival runs for four days and presents a varied collection of computer animation genres and styles. Every type of animation work is accepted, such as traditional animation, stop motion, scientific visualization and others. SIGGRAPH is a huge event with over 15.000 attendees. A place where you can meet the major players in the business. The location is changing each year. Since 1999, the festival has been an official qualifying event for the Oscars Best Animated Short Film award.

VIEWFest Digital Movie Festival (Turin, Italy) (2005) VIEWFest is an international festival of animation and 3D cinema. It is organized by VIEW Conference and starts after the Conference as a second part of the event. The festival offers independent productions the opportunity to have an international audience and brings the best of the international production to Turin. VIEWFest focus is on Italian filmmakers, digital artists, and other creative professionals. The festival is looking for innovative works by Italian filmmakers or filmmakers that have an Italian topic or subjects. The contests are open to works of all genres and visual forms.

Cartoons on the Bay (Rapallo, Italy)

Nadine Baethke is the Festival Liaison Director and co-founder at FFL. Her film training is grounded in AV media Science at the Konrad Wolf Academy of Film and Television, Potsdam. Her editorial background includes positions as Sports Editor of RBB, Berlin, Editor at the Galileo TV science magazine Pro 7, Berlin and a degree from the Journalism School of Berlin. Reach her at nadine@filmfestivallife.com