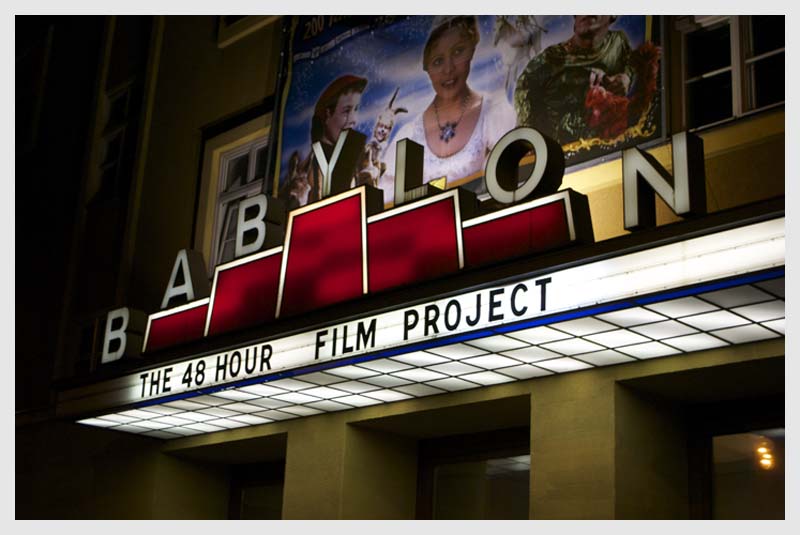 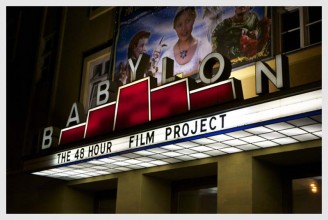 Running a little late, I screeched the back breaks of my bike to the racks footing Berlin’s Babylon, camera balancing in my fingertips, phone in the other hand (dialing our FFL camera agent with my sincere late apologies), quickly to realize there was no rush at all: there stood a line of hundreds and hundreds of attendees, anxiously cramping themselves into the foyer.

I had read of the frequented sold out audiences to the 48 Hour Film Project, but never believed it. All related marketing was grass-roots-basic: a website covering the 48 Hour’s international events over 125 cities, geared to educating filmmakers of the process, more than enticing potential audiences to the event. 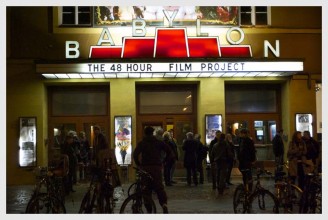 Confusion quickly flipped on its head when I recognized the majority of faces darkened by the rings under their eyes. Of course! This was a production driven and attended by the networks of filmmakers involved. A noticeably close community, this set the tone for the night’s undertakings:

Loose. Raw. Low budget. An open window into an intense 48 hours of aching and breaking film production, by the filmmakers, for the filmmakers.

Rules are: Filmmakers pay their application fee and they are in. As the first day of the project arrives, they are dealt with their city’s individual conditions. For the 14 teams based in Berlin, this was, the evening of Friday 5th October who were:

-Told they must include a character:  Frederic or Friderike Kaiser and Stadführer / City Guide
–A prop: ein Löffel / a spoon
—And the script line: Darauf, habe ich schon immer gewartet / That’s what I was always waiting for

Then, they had 48 hours to conceptualize, write the script, shoot and edit. And here we were, about to witness their weekend trip. 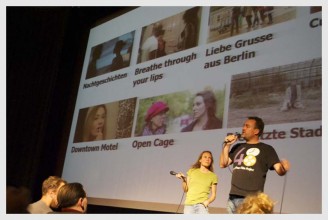 Handed ballot papers upon entry, we were instructed we would need them later for the final voting procedures by the event’s producer Richard Schut. I had been given the opportunity to speak with Schut earlier who also runs the event in three of the cities back home in The Netherlands. He breathed the life into this Berlin edition, which was only in it’s second year.

You could see his breathlessness in putting this together; running around, roleplaying from soundy to MC to central administrator. He was a man to be commended for his energies, which made us all the more forgiving on the looseness of the outfit. Instead of judging the lateness of our entrance to the cinema, or the numerous front of house issues, I sat, let go and felt welcomed by him and his team in this warm environment.  Screenings opened with a speech from the founder, Mark Ruppert, down in Washington D.C, shot in his home. I thought, it was more than fitting as it is, after all, the founder who sets the tone, right from his lounge-room. 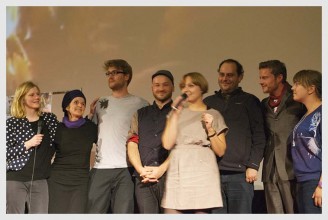 The first up was dark comedy BIG SHOES by No Ones which was a beautifully hard hitting start. As the films flickered by, we began to understand the things you focus on when you return to this short production period: Simple stories and the subtlety in human connections. 5th film in, SOFT SKILLS FÜR STADTFÜHRERINNERIN by WTF-Filmkunst was exactly this. Somehow it managed to build a story around a small group of old, gender confused men, training in a self-help group to become female city guides. Their ability to make a male production team ‘make it work’ with the film de femme genre was proved as over three hundred audience members joined in laughter. Then, CURIOSITY CHANNEL by And the Oscar goes to… showed off the mockumentary genre with standout acting and complex plot development. Which brings me to number 14, the night’s last film: DIE LETZTE STADT / THE LAST CITY by Tight Tonic.

Hard rain on a glasshouse. A stunning apocalyptic setting created within seconds into the film, Richard and his team clearly left the best until last. In the awards that were to follow it, DIE LETZTE STADT cleaned up Best Direction, Best Music, Public Choice Award and overall Best Film. The central team behind it were Director/Editor Astrid Gleichmann, DOP/Editor Ulrich Hartmann and Director Assistant/Producer Britta Ender. 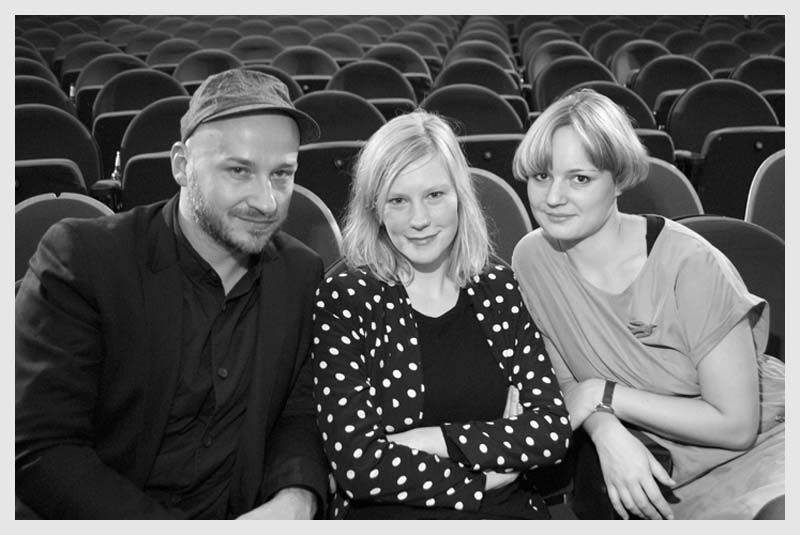 Sitting down with them post show, the team really gave us a sense of this light heartedness of the filmmakers choosing to enter the project. ‘3 years ago I joined the 48 hour team in New Zealand and we were not that successful but it was lots of fun. We joined last year and received third prize, which changed our perspective on the possible outcomes of the project,’ Gleichmann said. ‘However, it is good when you join a festival like this that you don’t think about the ultimate goal. It is only forty eight hours.’

We also spoke of the very little time for detailed post production, allowing projects to make some major obstacles
into strengths.‘We knew there would be rain, it would be a rainy day on Saturday,’ said Ender. ‘And this was our shooting day,’ added Hartmann. ‘And we had this location, this garden place and we thought, ok rain on the glass could be…’ ‘Difficult to shoot in!’ intercepted Hartmann. ‘But once we worked that out, we realized it could be perfect. It could be part of the story,’ Ender finished.

The team spoke of the 48 hour challenge and its demands for simplicity in storytelling. ‘What is important to us is that we are both very visually driven. We like to think in pictures and actually the story comes after that. What was an advantage for us is that this style helps to create a simple story, working really well in 48 hours.’ Gleichmann added. 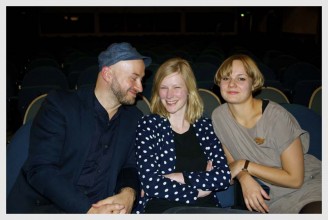 From here, DIE LETZTE STADT is one of the 125 winning films (one from each city) which will screen at the 2012 Filmapalooza in Hollywood, California. Then, the 12 top films of 2012 will screen at the Cannes Film Festival Short Film Corner.

The night ended with team shouting in unison ‘Hollywood, Hollywood!’ so, despite, this project’s loose organization, I walk out of the theaters with a big smile on my face, thinking that maybe entrances to film festivals don’t need to be built with such serious attitudes. Maybe projects like the 48 Hour Film Project offer just as many introductions to the circuit as the more traditional gateways. We will follow the festival lives of Astrid Gleichmann, Ulrich Hartmann and Britta Ender and only see… For now, we can sit back and enjoy the film they made in a weekend: