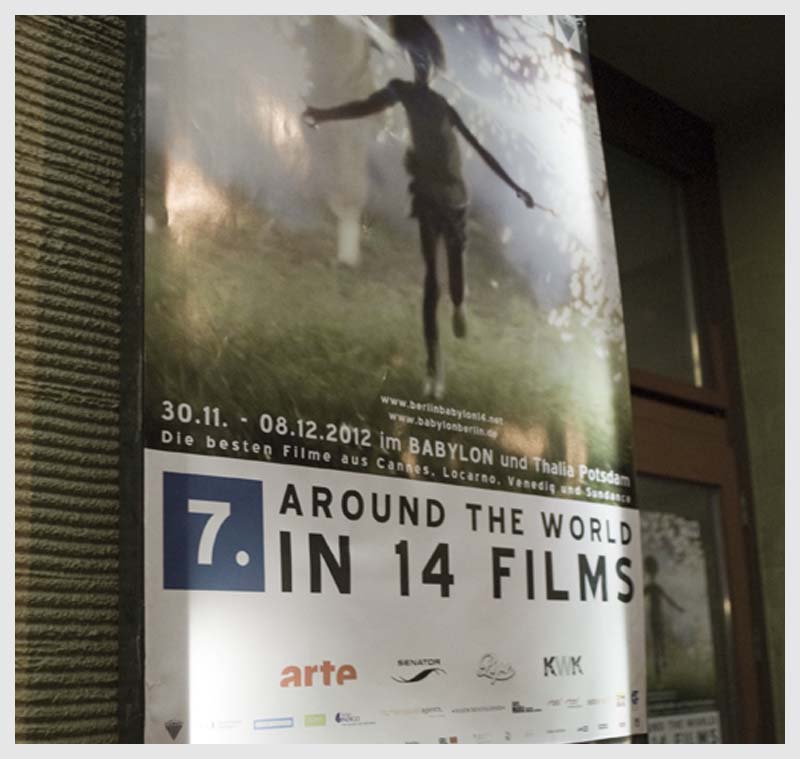 ‘We can do the interview in English or German,’ I said. German NYC based Philipp Engelhorn answered, with more enthusiasm than I had prepared myself for ‘No, English, please, English would be great’.

Showing such stand out adaptability, Engelhorn is the type of runaway success story we love to be reminded of: studied at the NYU’s Tisch School of the Arts, went on to build himself an impressive portfolio alongside production company Cinereach, and most recently was Executive Producer of the major international success: Beasts of the Southern Wild. As part of the 7th edition of Around the World in 14 Films, the film opened a highly connected industry program presenting major new faces in International Cinema, last Friday 30th November at the Babylon Berlin.

Directed by Benh Zeitlin, this fantasy drama has garnered overwhelming buzz on the 2012 circuit, cleaning up Sundance’s Grand Jury Award and Cannes Film Festival’s Caméra d’Or and recently accoladed at the Gotham Awards with Best Breakthrough Director, nominated in four categories at the Spirit Awards and is said to be in line for the 2013 Oscars.

Strangely enough, Beasts of the Southern Wild’s fighting position in the festival circuit could seem almost inconsequential to the major US distribution deal with Fox Searchlight within days following its premiere and the international deals across Europe and Asia delivered thereafter.

Following the screening, Engelhorn got talking with us on how festival planning can synergistically work alongside distribution deals to give films like this the life they deserve. Here is his advice on some of his most recent success-earning decisions:

“We were lucky to get really great advice right at the beginning that, going into your first premiere you should always have a sales agent and a publicist and ideally an international sales agent too. That means: nail down the top distributors that your film suits, then find the sales agents who have done deals with them and narrow your search down based on that. Then do the same with publicity.

We had WME Global’s Graham Taylor on the US side and Charlotte Mickie from eOne Films on the international side. PMK Marian Koltai-Levine on the publicity side. They all worked as an amazing team – so many conference calls and meetings strategizing our main goal: how to really position the film in the way that would get us to the kind of distributors we needed for the film to be able to be seen by as many audiences as possible.

This entire process extended to two or three months – starting in early November and then finishing up as Sundance announced.”

“Beasts of the Southern Wild went through the Sundance labs, which is part of the institute, but that obviously had nothing to do whether the film will get into the Sundance festival. Despite this relationship we grew with them alongside the labs, we applied just like everyone else, and heard the news just like everyone else. We submitted to them twice. The first year we pulled out because we realized we were not ready. Because of this they did come to be tracking the film, waiting for our next submission.”

3. Take on negotiations with distributors pragmatically.

“We premiered on the second day of Sundance – Friday 22nd January 2012 at noon. There was good buzz, well fantastic buzz, you couldn’t have asked for more really. Then, over the weekend, we actually got a lot of interest from a bunch of distributors. So, we started taking meetings to get to know the distributors and what their initial ideas were around the film. They had lots of questions for us, for the team and Ben – about what ideas he – or we had in regards to the types of audiences who would respond well to the film. We knew Fox Searchlight was also interested – ok – very interested and had a meeting with them too. The group as a whole responded best to the offerings of Fox Searchlight.”

4. Maintain distribution back up plans.

“Maybe some of us secretly had Fox in mind but we kind of grouped the distributors into categories. We had different ideas about what we would like to do with the film if we chose to go with a different kind of distributor. For example we knew that if we went with a smaller distributor – and I am not going to name any names – it would require a lot more commitment from our end to get the film the kind of release we were really hoping for.”

5. Never forget the importance of festivals.

“So, what we ended up with was: What if we went with a distributor who was going to do a huge amount of work and what if we also did a huge amount of work throughout the whole release of the film? What would that look like? And thats what we ended up doing. We actually built a whole grass roots team on our side to complement not only Fox Searchlight but also the bunch of International distributors and we built a body of promotional efforts around them.”

6. Be open to strategy adaptability.

“Once Fox came on board, this original festival strategy completely changed around them. We see the festival life of the film as something really key to building word of mouth around it and once you have a distributor involved – that obviously changes – and you need to think about how to use the festival strategy for other reasons too. In terms of the deal that we agreed to, I can’t speak specifically but generally, our entire approach has been about longevity for this film not short term rewards. So, what they offered was fair. We are very much interested to see what this will create for us next.”

Engelhorn’s major festival marketing plan alongside the distribution company’s existing plan has earned Beasts of the Southern Wild credibility on a global scale. In this case, having a distributor on board immediately following premiere, has forced the festival plan into more of a profiling vehicle for the film. While Engelhorn seemed quite calm surrounding  his recent success, he did laugh as he concluded with: “From here on, for Cinereach, there is a huge difference in all future operations because we have all this pressure. All of my future projects will be affected by this film.”

Around the World in 14 Films runs until the 8th December at the Babylon Berlin and Cinema Thalia, Potsdam. Beasts of the Southern Wild arrives to German cinemas this month. Engelhorn has already begun building his next beast, set to grace festival screens in 2013.

My rating: Around the World in 14 Films