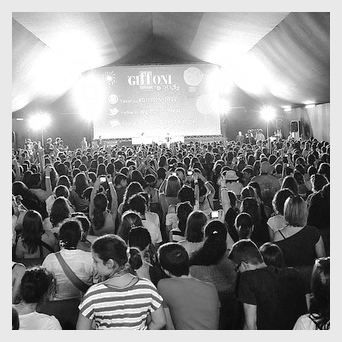 ‘Be Different’ is the theme of the 44th Giffoni Film Festival – an event aimed at showing new and fresh films. The festival is dedicated to children and teenagers. Standing in front of a full packed cinema with an international, young and very honest audience is the kind of challenge you will face as a filmmaker here. ‘For some filmmakers it can be very scary, but at the same time it is very funny,’ says Deputy Artistic Director Antonia Grimaldi with a smile on her face. She gave us four tips for filmmakers at submission time.

I think one of the most difficult things for a filmmaker is the way to talk with a young audience without being childish. It is very important to be sensitive. You can talk to them about anything but you have to try and find the right way, and that is absolutely not easy. The risk is that you come across as too superficial.
This year we very much loved films from Northern Europe – Danish and Norwegian films – because they know really well how to discuss very sensitive themes with young people without being superficial and without being stupid, but the same time not being boring. The balance is essential.

Kids want to find something different in our festival. I really like films that are not conventional, something original. On TV children see main characters who are always perfect or very funny or very good at something. So it is very good to show them that if you are not perfect, you are still lovable and it is good to be honest with yourself. Children want to find something that makes sense. They love it when at the end of the film they can say “ok, this character was doing that because of that.”

Giffoni Film Festival is dedicated to children and teenagers. The festival has different sections for different age groups. For the 3 to 5 year olds, we like to present shorts and animated shorts. We prefer films without words or with only a little dialog. We discovered that little kids don‘t like voice over system and they are too young to read subtitles.

For the age of the primary school we have short, feature and animated films. The dialog is not a problem because here we use a voice over system. We have a very good actor who is not just translating, he is doing his best to create life in the Italian version.

For the section Elements +10 the themes are about friendship, relationships between kids and parents, but sometimes it is also about issues like parents getting divorce or the new kid coming to class. For the older children the social issues and the problems kids face are more present in our films. In the section Generator +15 the films can be very tough but we learned that children are very smart and very open minded. They want to see different things.

At Giffoni filmmakers will have always a Q&A with the audience. The theater is always full of kids; it is not just a small group sitting there, the theaters are crowded. For some filmmakers it is very scary, but at the same time it is very funny. The little ones are very funny because they ask everything. They want to know about your car, your home, if you have a dog,… They are not influenced by what the critics says, so it‘s really refreshing – they usually don‘t know anything about the director. It is really an experience for the children and the filmmakers to meet each other.

The juries of the section for the little ones to 10 are local. But from 13 to 18, they are from 40 different countries. In Italy they are hosted by Italian families, it is kind of an exchange for jurors. This is the reason we changed the name of the festival from Giffoni Film Festival to Giffoni Experience. We want to underline that it is not just a festival, you get a real experience here watching films, meeting directors, meeting children from different countries of the same age. If a director goes to another children’s festival, the Q&A will be with children of the same cultures. In Giffoni a filmmaker will have an international audience, with different cultures and different reactions.

4. Explore the circuit through the catalogue

We know that many other festivals check our catalogue. We know that other festivals contact filmmakers from our festival because they found the film in our program catalogue. So a very interesting thing is that Giffoni is a kind of point of reference. Everybody is looking at our catalouge because they know that there are intersting films in it. Last year we had 150 films in our catalogue.
To build this years catalogue FilmFestivalLife is very useful. It is a very easy system and it is very easy for us to watch the films on FFL, and also to have all the information there.

:: FOCUS • The Importance of Short Film Festivals with SHORTS THAT ARE NOT PANTS
:: FOCUS • 6 Points Filmmakers should know about GLOBAL VISIONS FESTIVAL